This past Saturday a packed audience for the first US public screening of "Spirit of Love",the Mike "Stinger" Glenn story  http://youtu.be/Iga_dcMggGA  was filled with laughs,tears,and cheers in Houston at the TX Christian film festival.

Sometimes its difficult for people to understand the process regarding marketing and selling and promoting an indie feature film.It is not about just showing it anywhere.Its about strategy.Its about getting distribution.Its about putting this open captioned film on the big screen so that both deaf and hearing people can enjoy it side by side.Its about finding the right strategic distribution partners who understand our project and the bigger picture and demographic of our targeted audience,which happens to be very broad.

We were invited to screen at the festival and as I was gently reminded today "Sometimes you have to dance with the one who brought you." In other words they invited us with a full court press.

The film was well received with great positive responses from both Deaf,HOH,and hearing audience members of all ages.Actually the age range started at age 5 thru 90.Part of the process for us included providing comment cards for feedback.We wanted to know what people thought and felt regarding our film and our story. 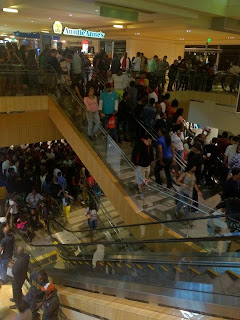 The film screened during the NBA Allstar weekend and the traffic from those activities spilled over into our successful screening.It also was the cause of many with reserved tickets NOT being able to navigate traffic to the screening.So we apologize to those people and hope they get a chance to catch us on the rebound.TX Dot closed frwy exits due to overcrowding capacity at the famous Houston Galleria.

Those who were able to screen it were overwhelmingly grateful,thankful,and inspired by our amazing cast.
As a filmmaker I have never experienced the applause and cheers at the end of the credits like we did this weekend.It was very touching.

One audience member stated that our film has a "Sweet Innocence" lacking in todays films and may be the "Feel good" movie of the year.Its definitely early in the process but we will stand on that tasty morsal.

We participated in a Q&A following the screening with interpreters.All audience members were animated and engaged in an hour long discussion.

It was a wonderful experience for all of us from the Spirit of Love family who were able to attend. 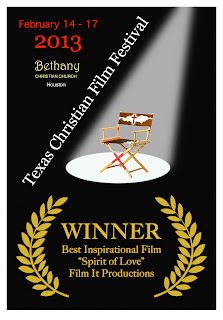 We were awarded the "Best Inspirational" film by the festival committee. We are truly grateful for the opportunity and the experience.

Posted by Spirit of Love Movie at 5:57 PM No comments:

I sat down with some words scribbled by me on paper which I felt were inspired from above this week along with our films editior Barry Kolsky, and  music inspired from above and scored through non other than Mr. Alex Grant to create the Official Theatrical movie trailer for Spirit of Love.

Barry and I sat and pulled clips and and audio and images that we felt inspired us. Oddly enough they seem to fit. So much goes into the making and marketing of a film that you can lose yourself going and coming.It was like I knew something was percolating in my brain but it just wasn't quite there yet.
I knew we needed an Official Theatrical trailer but it just wasn't time.

The words and outline started to come slowly but they weren't quite right.

I scribbled and crossed out,and scribbled more and more ,but not until I was
flying 30,000 feet up in the sky on my way to Los Angeles did it come pouring out.
THIS SEEMS TO BE A WAY that God uses to get my attention or to give me insights and lessons.
(Perhaps he knows I don't like flying) :)

Can't really explain it but it's not the first time a vision for a creative project became clear on a plane.

In the past we have posted teasers and trailer footage which were being used for other purposes regarding the film,but nothing had the right vision of what we wanted to convey for the film and our tremendous teenage heros,and the great call that has been on the life of Mike Glenn to impact teens through his character and actions. We are truly grateful and proud for all who have been a part of this film project.

However I hope everyone will enjoy the new Official Theatrical trailer which features our amazing teens who are not actors,and most all  had never made a film before. But that doesn't take away the fact that lessons were learned and taught by all on set, and even through the editing of this film and now the final trailer and ultimately the finished film.

I believe there is a greater and bigger purpose for this film and its message.

Words like Racism,Prejudice,Hatred,Anger,Bitterness,which are present in our film, can all teach lessons. What You Do with the Lessons,Determines the Character of a Person.
Enjoy the Official trailer and share and comment on FB and youtube to spread the word about our film. http://youtu.be/Iga_dcMggGA